Setting: a town in Florida

Storyline: Haley becomes trapped during a hurricane in the crawl space of her childhood home while trying to find her father. However, she discovers she is not alone. Now she must save herself and her father not only from flooding waters, but from something even more deadly and scary. 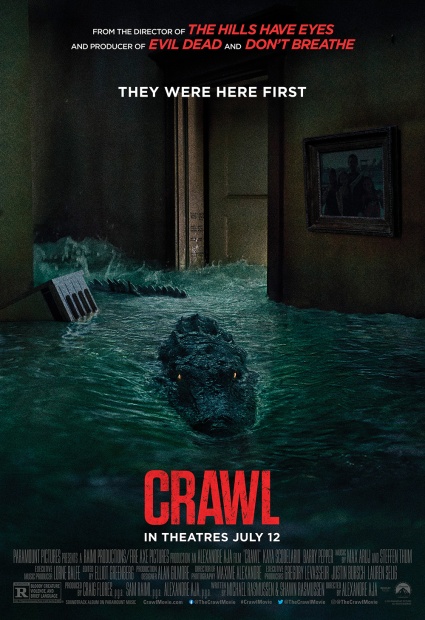 Heidi Ho Horror Fam! Last week on Alm Street, I watched Crawl, the killer alligator movie out in theaters. Alligators are my favorite animal and to see them as villains made it even more enjoyable. Believe it or not, I thought it was really good. After watching this, a friend told me that the concept wasn’t that scary at all, so I decided to Google that shit. Turns out that there are a lot of gators in Florida, (and I mean a lot). During mating season, they can become a huge problem, especially because it gets hot outside and their hormones are going nuts. I only found three good stories about gator attacks in Florida. So just imagine searching for stories about them in the Amazon.

I’ll start off by saying I’m a huge fan of animal-attack horror, so I knew walking into this one it was going to be a treat. I enjoyed films like Piranha, which doesn’t come to a surprise since Alexandre Aja happened to direct that one as well. But Deep Blue Sea probably has to be the closest to Crawl in terms of it not being too silly. The one thing in common these films have is that they’re missing the true scare factor. We watched them but definitely weren’t the least bit afraid. The selection of animal- attack films nowadays in the massive wave of demons, zombies and vampire films, is incredibly limited. It was refreshing to see this one be released.

So, basically what happens is Haley is told by her sister that her father isn’t answering calls. She decides she is going to go check on him and she drives into the mouth of an angry, Category 5 hurricane at her childhood home. After furiously searching through the home, she finds him in the crawl space and comes face to face with a huge alligator. This is where the title of the movie fits in. She now must crawl through the small spaces while not only avoid the alligator, but also before she drowns!

I thought the acting was pretty good. The relationship between daughter and father was believable and moving. Poor Dave was wounded the entire film and constantly fighting to stay alive while questioning the survival of Haley every time he heard a growl or snap.

The use of water was also done well. Believe it or not, there have been films I’ve seen with the worst wave motion or an awkward body of water with no movement. There truly wasn’t one moment I questioned the weather, which is very important here and a huge plus.

Cinematically, the framing in shots of the hurricane and water coming in were very satisfying and visually pleasing. I love the chaotic use of gray used to shoot the storm, because it set the tone for the film way beyond we got a first glimpse of the gators.

Some of the things I disliked in the film were some scenes were executed a bit over the top. A scene where looters are spotted at a gas station and gators brutally attack and eat them, the ?CGI? goes a little too far, where I even giggled.

Another article by ____, “everything I ever wanted in an animal attack film.” And I couldn’t agree more. If you enjoyed Jaws, Sharknado, or The Meg in any way, this one is down your alley. Lots of jumpscares, loud effects, in-your-face alligator shots, and of course deaths.

I enjoyed the music and sound effects the most because once everything was tied in, the scenes with the most anticipation made a huge impact to feeling like you’re actually there. It was perfect for jump scares with just the right amount of anticipation. Max Aruj and Steffen Thum outdid themselves, because if it wasn’t for them it could have easily turned into a cheap sci-fi film. Even the growls and heavy breathing made it seem like the gator was close but unknown even in the movie theater.

And if I remember correctly the damn dog, Sugar, stays alive for the entire movie. Lol

How would I rate this film?

Anticipation Levels: 10/10 (last one like this was The Descent, still one of my favs)

Entertaining: 9/10 (from the beginning the film grabs your attention)

There are always many perspectives so please let me know yours by commenting below!

Published by Panda on Alm

Latina movie nerd from Arizona. View all posts by Panda on Alm